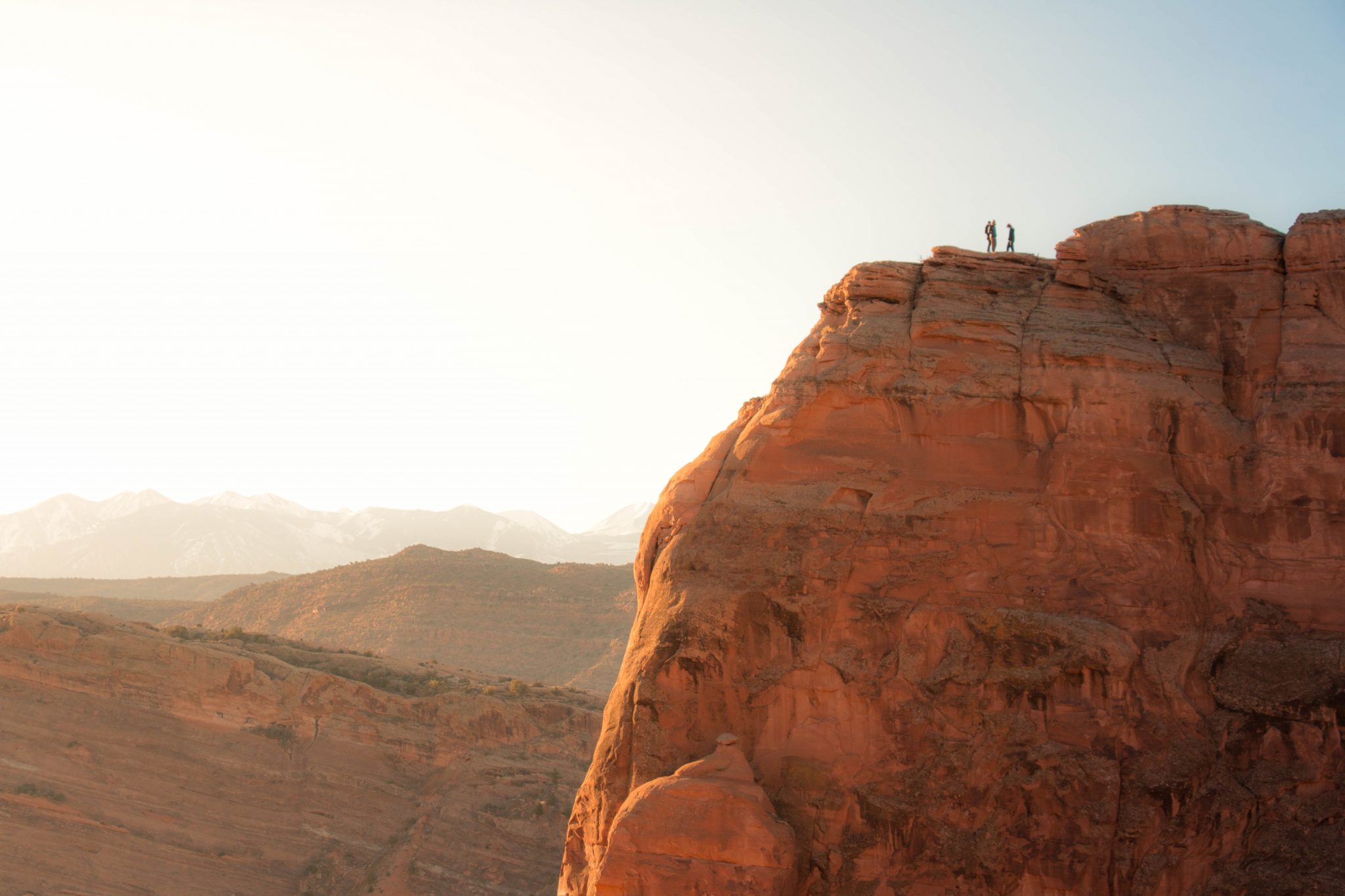 Within the borders of Utah sits five incredible and awe-inspiring national parks. How many can you name?

The stunning and magical landscape which makes up this beautiful state often includes picturesque scenes commonly printed in calendars and magazines. Although often overlooked by nearby states such as Colorado and California, Utah's mountains, cliffs, deserts, and out-of-this-world landscapes should not be missed.

As I sit here writing this to you, a young couple rides their bike outside the library on a beautiful 75-degree day, with a background of snow-capped mountains on the near horizon. A mere twenty miles away sits Zion National Park, an unrealistic landscape that shapes some of America's greatest wonders.

Utah is the state that holds the third most national parks of all states, standing just behind California (nine) and Alaska (eight).

Each Utah national park holds its own diverse landscape. When I first visited Utah two years ago, I only managed to visit Zion. Now, we have just finished mastering all five Utah national parks in five days. Throughout those five days, we hiked fifty miles, took in two incredible sunrises, saw at least twenty natural rock arches, sat on the edge of (multiple) thousand-foot cliffs, encountered temperatures as low as 20 and as high as 80, and saw enough beautiful scenery to last a lifetime. 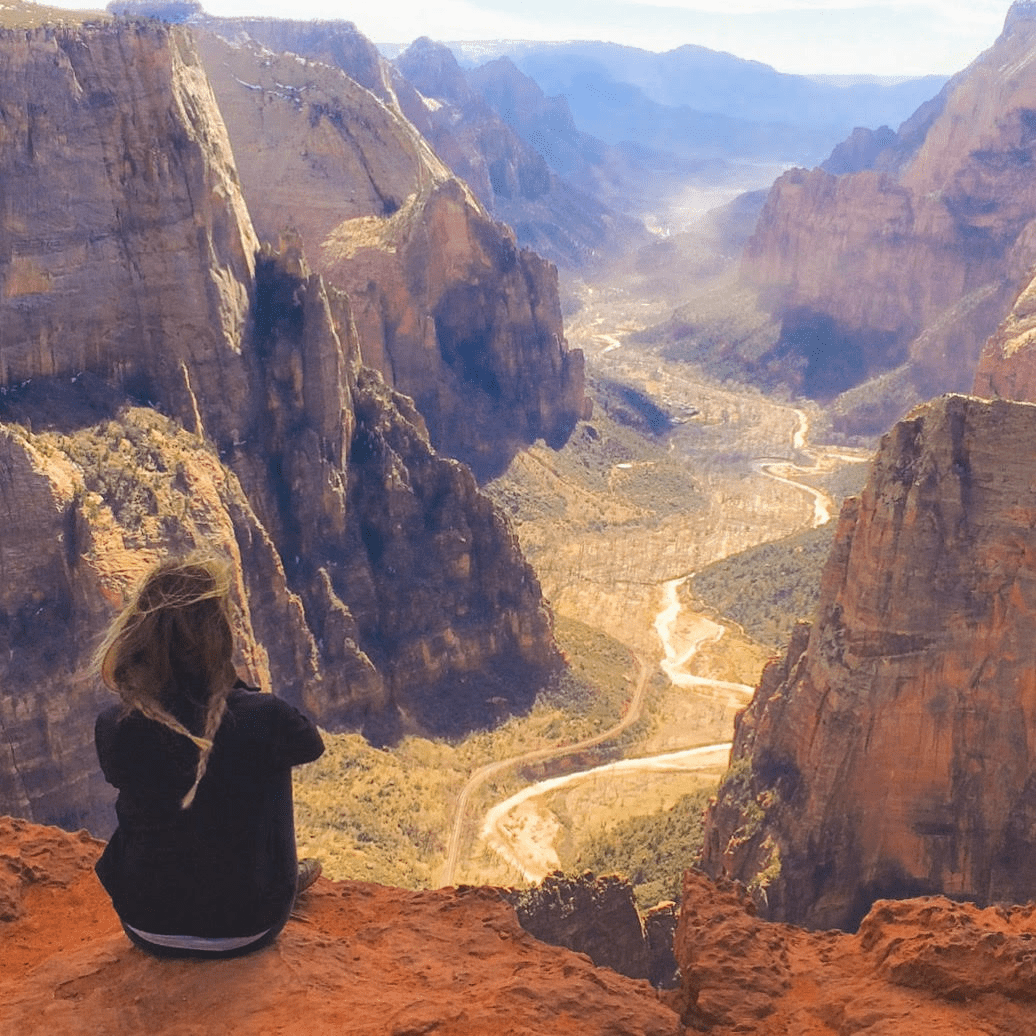 Zion's popularity has grown immensely over the last couple of decades. Much of this thanks to the internet, which often showcases its unique beauty on social media. The most famous hike in Zion, Angel's Landing, is constantly voted as one of the most dangerous hikes in the United States. What makes it so dangerous is the narrow hiking path leading to the summit, featuring thousand-foot cliffs on each side. If you are afraid of heights, this may not be for you. Just two days before our visit the latest fatality occurred from this hike. A man hiking alone fell nearly one thousand feet to his death near the saddle. 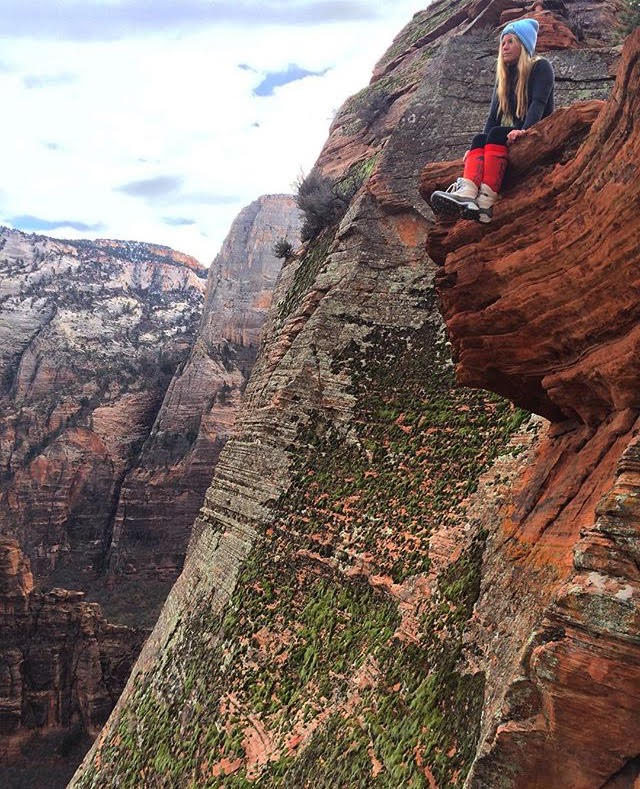 I hiked Angel's Landing on my first visit to Zion. This visit, we instead hiked the popular Observation Point Trail. Although it has more elevation gain (2100 feet) and a longer trail (round trip 8 miles compared to 5.4), Observation Point is less risky. This incredible path takes hikers high up onto the top cliffs of the park, and the point offers a fantastic tunnel view of the entire southern portion of Zion.

Before the popularization of the west coast, many people believed the cliffs in Zion were a myth, as nothing that magical or incredible could possibly be located on earth. Today, millions of people visit the park each year. Even if you aren't big into hiking, the valley of the park is equally as beautiful. Once you stand between the red cliffs that make up the valley, you too will understand why the beauty here was so unbelievable.

Other things to do in Zion National Park: Hike the Narrows and Hike the Subway. 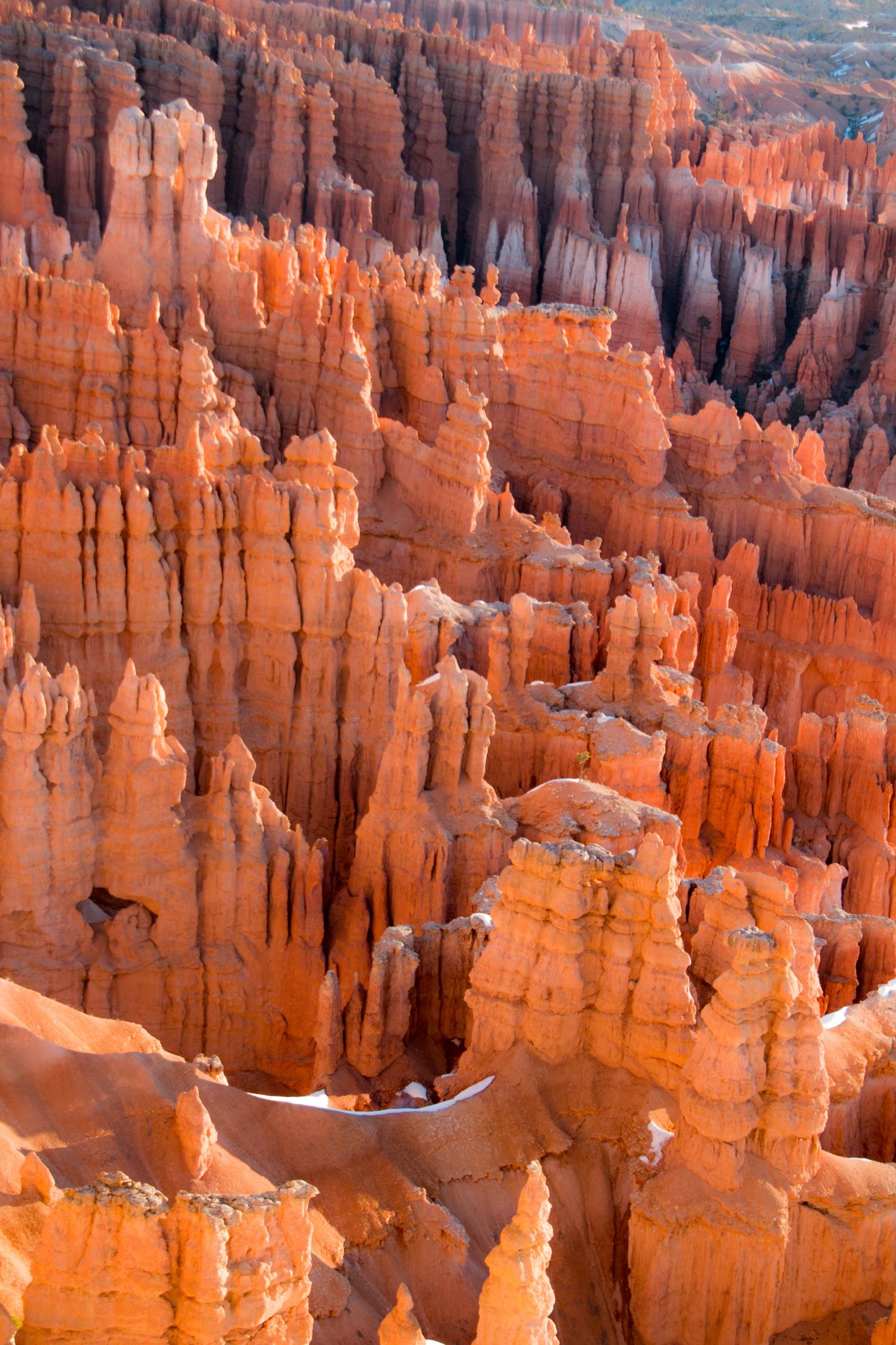 The astonishing uniqueness of Bryce Canyon is what made it one of my favorite Utah National Parks. Although not massive in size, the incredible spectacle it holds remains unforgettable.

The famous orange pillars of Bryce are known as Hoodoos, and are constantly being formed by rain on the soft sandstone rocks. One of the most unique features of Bryce includes the high rate of the changing landscape. In most national parks, it takes tens of thousands of years to change even the slightest formation of the park. Here, the Hoodoos you see today may look drastically different in one hundred years. 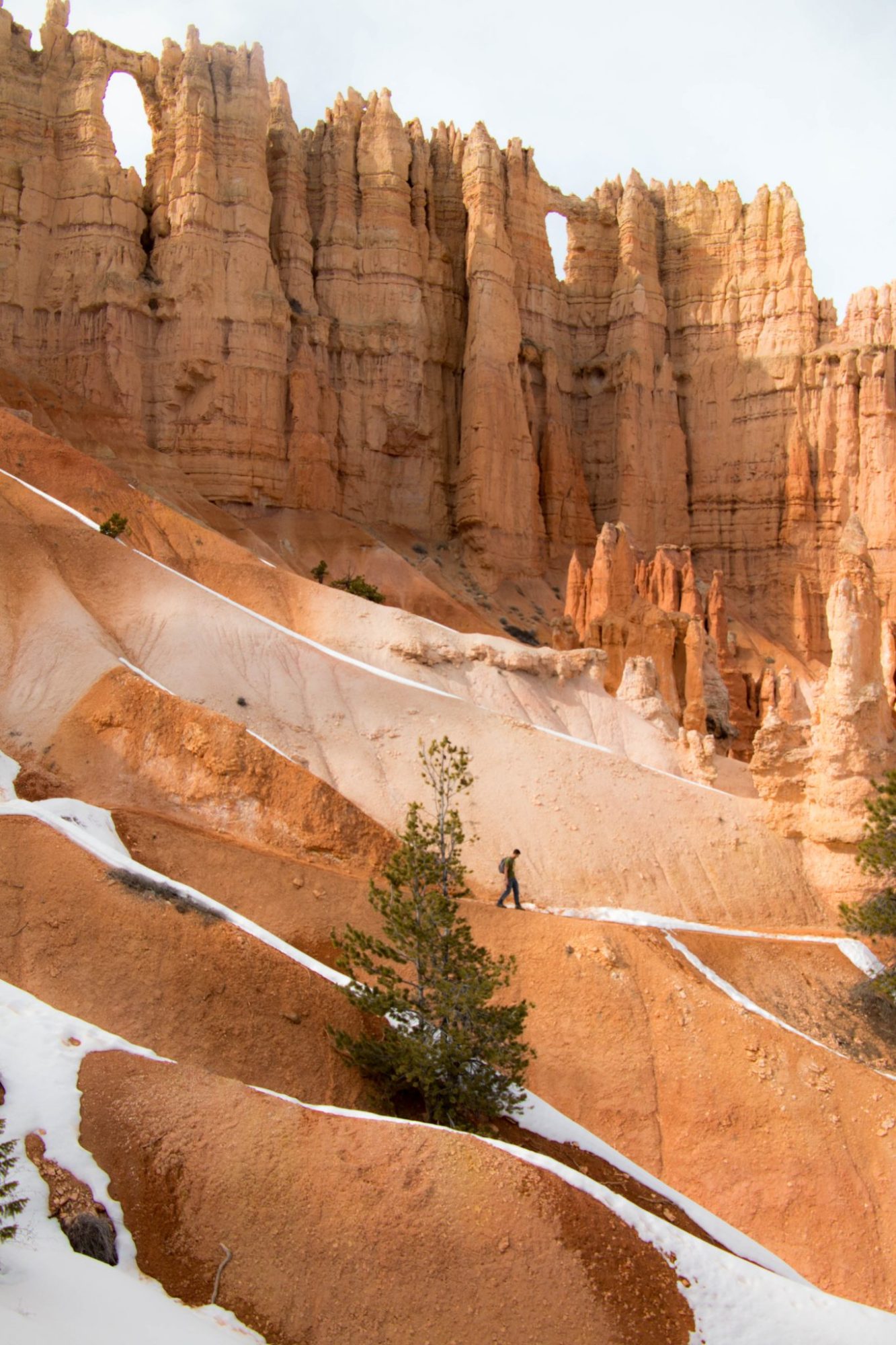 The entrance to the park is on top of the canyon, which gives the most incredible view of the hoodoos. There are three main lookout points: Sunrise point, Sunset point, and Inspiration Point. I highly recommend watching a sunrise in Bryce Canyon, however, instead of watching it from Sunrise Point (where the masses of people will be), I'd drive to Inspiration Point.

We spent most of the day at Bryce Canyon hiking the Peekaboo and Navajo loop trails. The National Park Service marks the trail strenuous, but anyone in fairly-fit condition should be able to complete it. 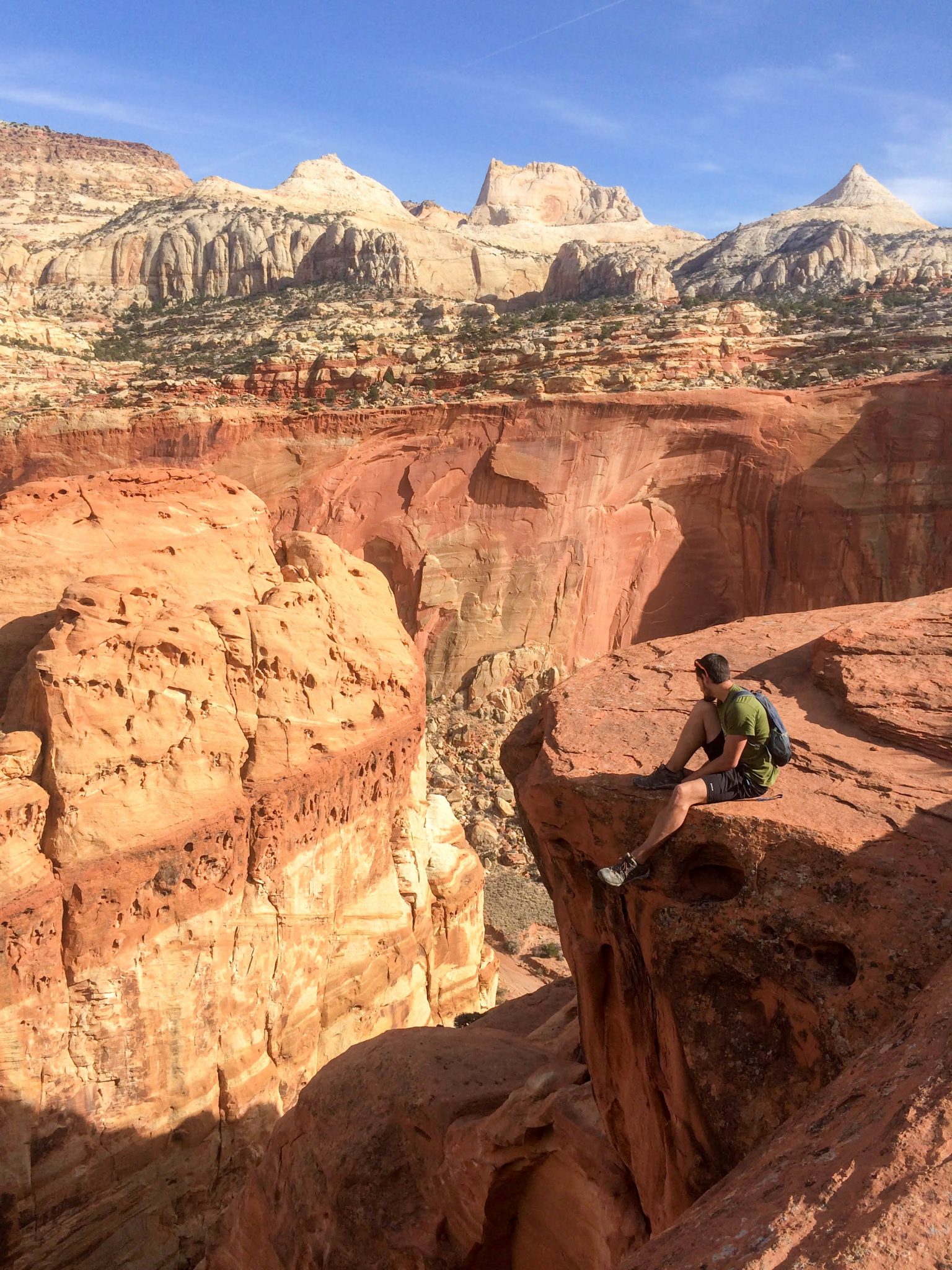 Capitol Reef remains relatively unknown to visitors looking to conquer Utah National Parks, but that what's make it special. Before visiting, I had a hard time remembering the name of this park myself. Capitol Reef National Park will win over both history buffs and nature lovers alike.

Inside the park is the town known as Fruita, which was settled in the late 1800's by some of the first pioneers to walk on the land since the Indians originally made it their home sometime between 80 and 1200 B.C. The old Fruita school building still stands near Indian petroglyphs. The petroglyphs were my favorite part of the park. Such history stands so close to you, and it's amazing to try and picture life in the desert valley thousands of years ago. 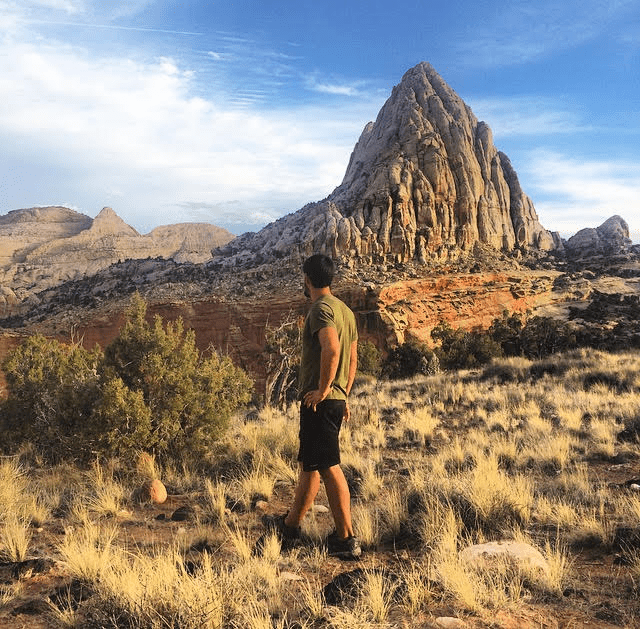 The Capitol Gorge Trail is an easy two-mile round trip hike that takes hikers on a lane of Capitol Reef history. On this flat trail, you'll first past another series of petroglyphs, followed by hundreds of names sketched into the side of a rock. Each name is accompanied by a date ranging from the 1880's to early 1900's. The names written here are from those first pioneers and land surveyors of the valley. Sketching in the rocks now is strictly prohibited to keep the original names preserved.

Cassidy Arch is a more strenuous hike with an elevation gain of 670 feet. the 3.4 round-trip hike takes you to the top of Cassidy Arch, and gives the opportunity to test your balance on the edge of 600+ foot cliffs. The finish offers stunning views of the surrounding landscape. 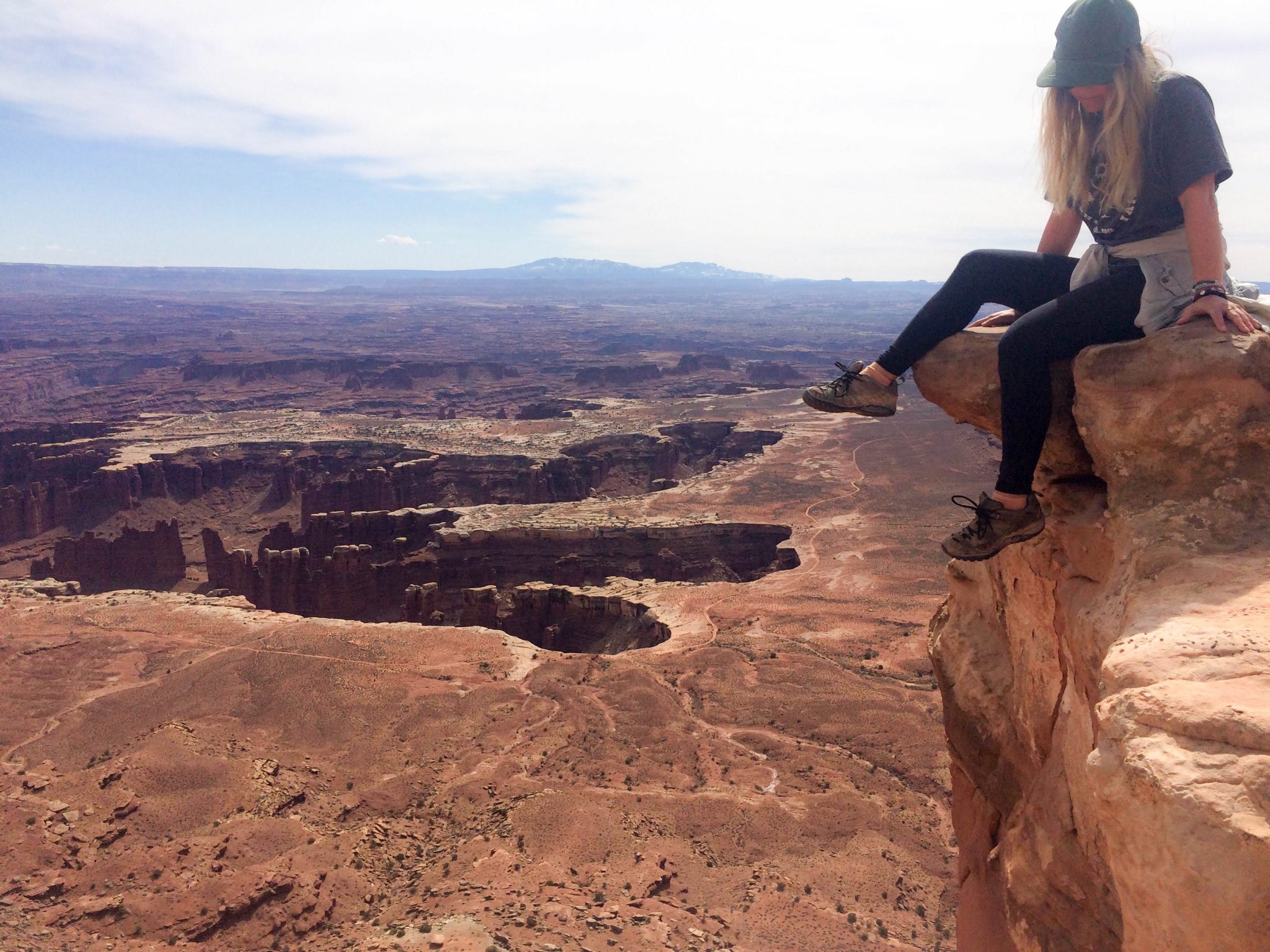 I wasn't quite sure what to expect at Canyonlands, but I'm happy to say I was far from disappointed (and I only saw the top half).

The main section of this Utah National Park sits atop a 1400 foot butte. Although a large plateau above the canyon floor, there is a paved road leading to this section of the park. The harder section to view is surprisingly the bottom. A 4x4 dirt road circles all of Canyonlands National Park, however, the road is a rough and ragged 100 mile which officials say should take at least two days to drive the circumference.

The view from the top of Canyonlands is what impressed me the most. You can see for tens of miles, and it almost feels like a section of the Grand Canyon. Grand View Point is a flat and easy hike that takes you to the end of the butte and offers absolutely incredible overlooks of the surrounding area. If you feel like channeling your inner daredevil, sit close to the edge of the sheer 1400 foot cliff. It's guaranteed to make your heart skip a few beats.

There are plenty of short and relatively easy hikes throughout this elevated Utah National Park. Fall and spring are the best times to visit as the summer temperatures here often reach 90-100 degrees. In the winter, it is common for snow and below freezing temperatures. I would confidently say Canyonlands was the biggest surprise of the trip, thanks to its incredible views. 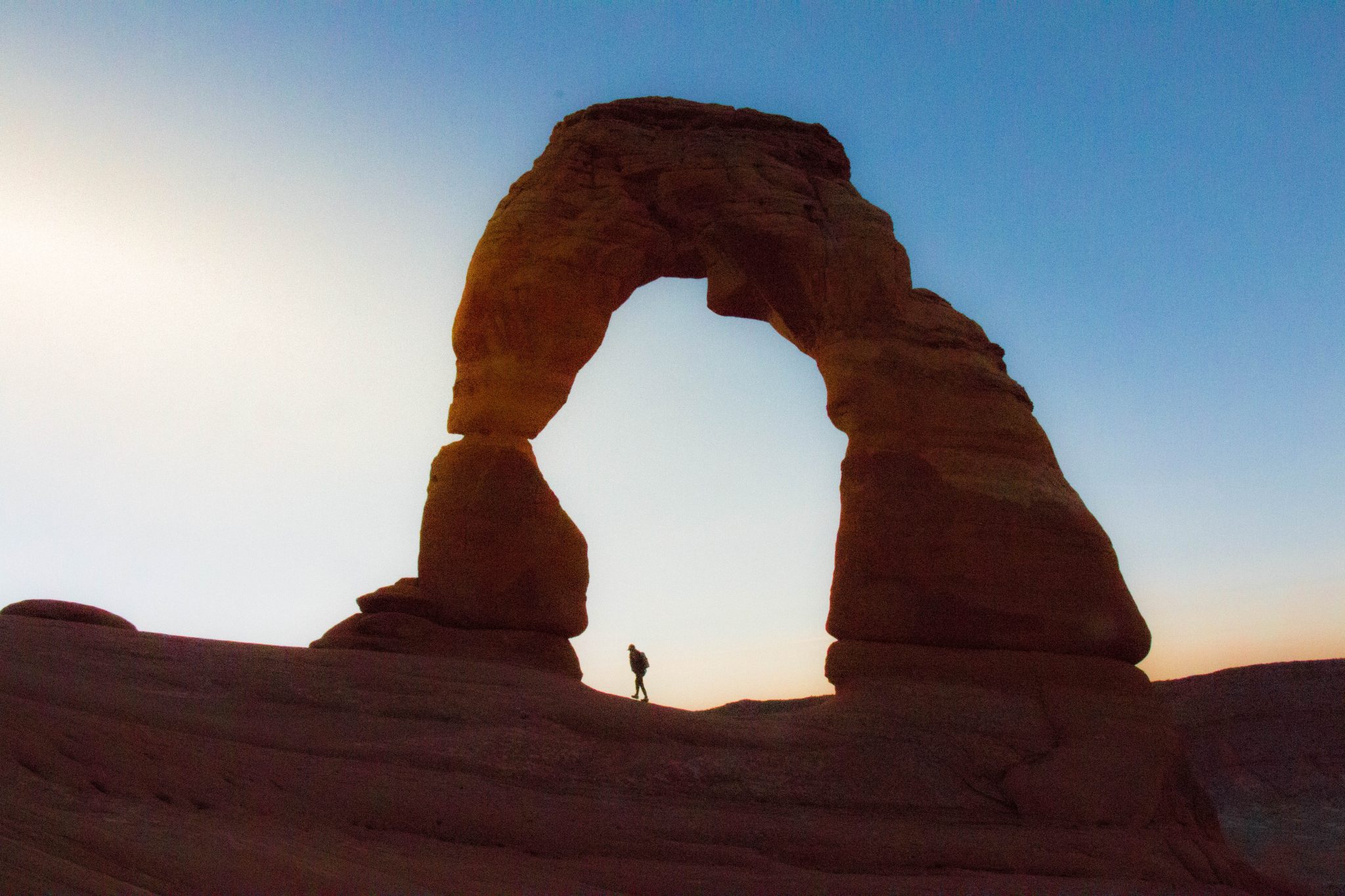 Arches National Park is home to one of the most famous natural icons of the United States: The Delicate Arch. Because of this, Arches is probably the most visited and densely crowded National Park in Utah.

Many people say Delicate Arch offers the best views at sunset, however that also means there will be upwards of 100-200 people in high tourist season. To try and dodge crowds, we decided to watch the sunrise at the arch instead. There were still 20-30 people who managed to wake before dawn, hike 1.5 miles to arch, and watch the sunrise there as well. Thankfully the crowds weren't overbearing and we managed to have a peaceful sunrise. It was the perfect start to the day.

Arches National Park has thousands of other arches and isn't just named after Delicate Arch. So many arches occur in this area because of the unique way the red rock sits on top of a salt bed and slowly erodes over time due to weathering and cracking. It takes thousands of years for a single arch to erode and form.

The longest and second most famous arch in the park, Landscape Arch, eroded as recently as 1991 when a massive 60 foot piece of rock broke off while hikers sat below it. Since then, the arch can only be viewed from a nearby platform.

Double Arch is an easy .25 mile walk, which means it gathers large crowds most of the day. In fact, many of the arches are easy to see by foot, with little to no elevation gain. Make sure to hike the more primitive routes during mid-day to keep at a distance from the overflowing parking lots. 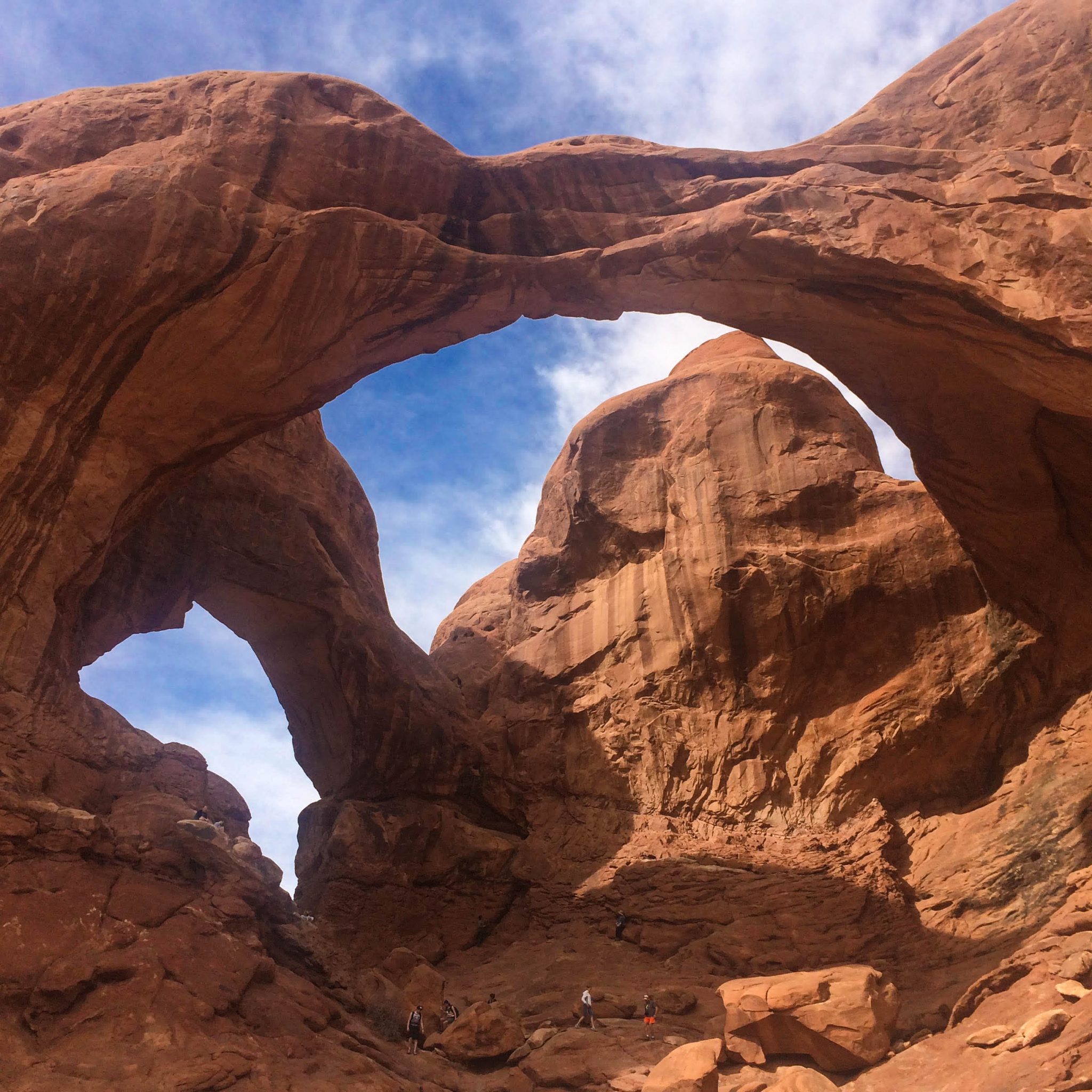 The thing about every Utah National Park, is that they double as International Dark Sky Parks. Sparsely populated southern Utah offers millions of stars which can be seen at night with the naked eye. The freeway to get to Arches National Park from central Utah holds a 115 mile stretch of no services. No towns. No gas. No nothing.

And I thought I was from "the middle of nowhere".

For the fellow Michiganders, Utah is bigger in total land size, however, the population of Utah is just over 2.2 million compared to Michigan's nearly 10 million. And a majority of that 2.2 million live in the Salt Lake City Region. Here, it's common to drive on a two-lane road for fifty miles without passing another car and is one of the few places left in the continental United States where light pollution is almost non-existent.