FOUR REASONS EVERYONE SHOULD VISIT SCANDINAVIA

Scandinavia might have words like menneskerettighetsorganisasjonene, and the winters might be brutal, but if you’re looking for awe-inspiring landscapes, friendly people, and saunas with beer, it’s a region not to be missed.

Consisting of Finland (which I did not visit), Denmark, Sweden, and Norway, the Scandinavian region is famous for a few things:

The prices may scare some off, especially budget travelers. Going into it I had no idea how hard it was going to be to stick to our $40/day budget. But, I think it’s important (remind me when I say this again in the future) to avoid traveling somewhere just because it’s known to be pricey. We still came out under budget and it became one of favorite places.

So let’s talk about why you should also visit:

Copenhagen, Oslo, and Stockholm are consistently rated some of the best cities to live in the world.

In fact, Stockholm was recently named the cleanest capital city on Earth.

Not only do the three countries hold some of the best healthcare and education, but they are also sophisticated in maximizing recycling and seeking out alternative energy resources. Needless to say, they’re A+ models of a first world country (let’s take notes, America).

For the most part, the people in these countries are content. I don’t think you’ll ever meet a Scandinavian not proud of their homeland.

It’s the only place in the world where you’ll run into wild reindeer and endangered Musk Oxen on the same hike. Trust me, it happened to us. Each country holds incredible beauty in vastly different ways. Let me explain:

Denmark is a flat peninsula-country that borders Germany. Although technically detached from Sweden there is a half-bridge, half-underwater tunnel that connects the two countries. Because of its flatlands and rich soil, Denmark is home to a lot of farmers. I distinctly remember Josh and me walked empty country roads one evening. There was a beautiful sunset, and I thought for a moment I was back in my hometown. Not to mention the flat shorelines and windy beaches closely matched those of Michigan.

Lakes, lakes, and more lakes. Sweden has a lot of lakes. But you won’t find cottages, speedboats, or jet skis on these waters. In fact, on most, you’ll see nothing at all. The country is incredibly beautiful and clean. Forests consist of tall pine trees that hide moose and elk.  But although the moose and elk are beautiful, they are actually quite a problem in Sweden as they cause many deaths each year by becoming involved in car accidents.

Think of how much damage a deer can do to a vehicle. Now multiply the weight by ten and hit it going sixty. Ouch.

Norway’s beauty is no secret anymore. However, I must say it is much more than fjords. The entire country is filled with extreme beauty. Top five favorite places I’ve ever visited. Even when the only thing I can afford there is bread and hot dogs.  #helpmeimpoor

The day we traveled into Norway from Sweden we had to get off a train and were shuttled onto a bus because of an issue on the tracks. We crossed the border at sunset and drove through the rolling mountains to the city of Trondheim along the central west coast. It was incredible. 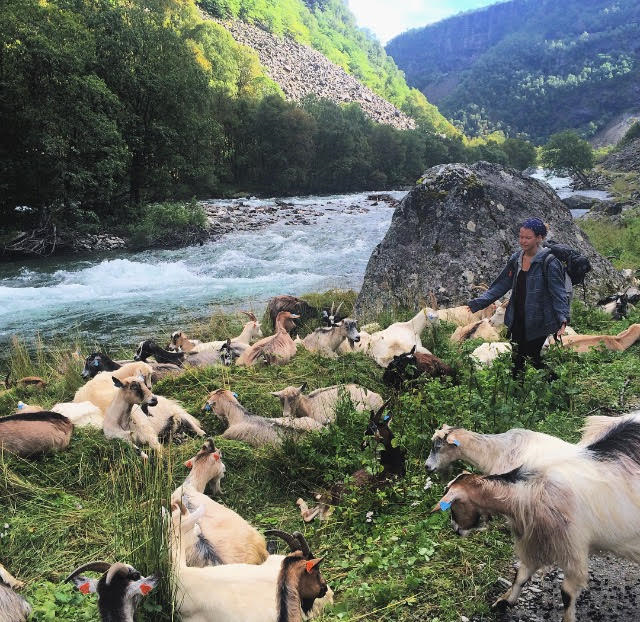 The open tundra landscapes are almost unrealistic. If you ever visit, I highly recommend jumping off the train in the most middle-of-nowhere spot you can find. Hike into the tundra with no plan and no destination. Enjoy a day or two in the wild.

In Norway camping is legal on any public land, which means you can pitch a tent on top of a mountain, on the ocean, or next to glaciers. Our last night in Europe we camped on a rock outcrop along the southern coast of Norway. Few boats or people passed, when we hiked inland we found a lake with singing boy scouts (or whatever the Norwegian equivalent is), and watched the sunset once more as our European adventure came to a close.

Everyone is extremely hospitable

We had the opportunity to meet and stay with a lot of locals in Scandinavia.

Our first Swedish host gave us the perfect welcoming night of drinking beer in a sauna. Hot tubs are very uncommon here, and instead, nearly every home has a sauna. Swedish tradition is to sweat and hang out naked with your neighbors and friends.

The same host had a tarantula. I hate spiders, but by the end, I think I might have called it cute once (who am I and what are these Swedish people turning me into?).

In central Sweden, we stayed in the town of Östersund, where our incredible hosts entertained us for the night by bringing us to an authentic Swedish Crayfish Party.  Basically, you eat crayfish, drink a lot of schnapps, and maybe play a ridiculously fun game called Kube where you chuck pieces of wood at other pieces of wood.

In Trondheim, Norway our host made us delicious pasta followed by a competitive game of darts (I lost), that he requires everyone who stays with him to play. We then traveled south and were hosted by a family with the most adorable infant son who let us crash in their mini-camper in the backyard.  We ate those hot dogs we could afford and watched The Emperors New Groove.

The cities are really, truly incredible

Copenhagen, Denmark is an idealistic city. It’s clean and beautiful, modern and old. The port of Nyhavn was one of the most beautiful sights of the trip, even if it was extremely crowded. What most people don’t know about Copenhagen is that it holds a section called Christianshavn. The independent neighborhood is Europe’s second Amsterdam, including access to herbal supplements.

Oslo is incredibly modern, and I preferred small Norwegian towns instead.  The tiny villages dotted around the country have incredible scenery and ridiculously adorable homes straight out of a Narnia film. Trondheim has colorful fishing wharves where all the homes and shops are perched above the water on stilts.

I wish I had more to say about Stockholm as I’ve heard so many great things about the city. However, our experience here included a non-stop downpour of rain, which left us sitting on paper Burger King bags under an overhang with some of the city’s homeless population. Sigh.

What they say about Scandinavia is true. Yes, it is expensive and it is beautiful. But look at it this way: here you may never have to pay for a hotel or campground due to the laws of wild camping. This can save great amounts of money and can actually make the trip cheaper than a location where a campground slot is 30 a night (cough, cough, France).